The herb wormwood has been used medicinally for centuries, and there are many health benefits to taking it.

Wormwood is a natural anti-inflammatory and analgesic, meaning that it can help reduce pain and inflammation in the body. It can also help improve digestion and boost the immune system.

In this blog post, we will discuss the history of wormwood, its health benefits, and some DIY remedies that you can use with this powerful herb!

Wormwood is an herb that has been used medicinally for centuries. Wormwood contains a compound called thujone, which gives this plant its health benefits! wormwood can be taken as an herbal supplement, or it can also be brewed into teas and tinctures. This herb has many health benefits including reducing inflammation in the digestive system, boosting the immune system, reducing pain and inflammation in the body, and improving digestion. Wormwood is also a natural antiseptic, meaning that it can help to fight off infection

The History of Wormwood

This herb has been used for centuries to treat a variety of health conditions! Wormwood was first used medicinally by the ancient Egyptians, who brewed wormwood tea and used it as an herbal remedy for malaria. wormwood was also used by the Romans, who brewed wormwood wine to treat their sick people during times of plague or famine. The name wormwood comes from its ability to kill intestinal worms! Wormwood has been prescribed by doctors over time because of this property.

This herb contains a compound called thujone which gives wormwood its health benefits! Thujone works on inflammatory pathways in your body to reduce pain and swelling, improve digestion, fight off infection (such as colds), help with weight loss goals through increased metabolism rates plus much more. It can be taken orally either mixed into drinks like juices or smoothies or taken as an herbal supplement in capsule form. wormwood has also been used topically when applied directly onto the skin, such as psoriasis and eczema conditions.

Wormwood can help to boost your immune system by increasing white blood cell production which helps fight off infections faster! This herb contains antioxidants that protect against free radicals present in pollution such as cigarette smoke plus many other health benefits include improving digestion through increased bile flow from the liver into the intestine (which reduces constipation). Wormwood tea can be used for colds/flu symptoms like congestion due to its antibacterial properties; it kills bacteria on contact before they enter our bodies via nasal cavities so this means lessens the chance of infection taking hold.

Wormwood is a natural analgesic and anti-inflammatory agent, making it great for reducing pain and inflammation in the body! It is effective for conditions such as arthritis, headaches, muscle aches/pains, menstrual cramps plus more. The anti-inflammatory properties of wormwood can also help to reduce swelling due to injury or surgery.

Wormwood helps improve digestion by increasing bile flow from the liver into the intestine. This herb also contains essential oils that stimulate gastric juices secretion which helps with breaking down food in the gut, therefore, improving absorption of nutrients. Bile is produced by your liver and stored in your gallbladder before being released into the small intestine during digestion.

Wormwood has been shown to be effective at reducing constipation because it stimulates peristalsis, which means that food moves through more quickly and easily while also stimulating gastric juices secretion (digestive enzymes).

Wormwood is a natural diuretic, making it great for those who suffer from water retention or have trouble urinating frequently enough due to medical conditions such as kidney stones or urinary tract infections (UTIs). Wormwood’s diuretic properties make this herb ideal for helping to relieve bloating and improve digestion by increasing bile flow from the liver into intestines so that food moves through more quickly while also stimulating gastric juices secretion which helps with breaking down foods in gut, therefore, improving absorption of nutrients.

Wormwood contains antioxidants, making it great for those who want to protect their cells from damage caused by free radicals. wormwoods anti-inflammatory properties make this herb good at reducing swelling due to injury or surgery; wormwood tea can be used as a natural remedy against colds/flu symptoms like congestion due to its antiseptic properties; it kills bacteria on contact before they enter our bodies via nasal cavities so this means lessens the chance of infection taking hold.

Wormwood is a natural antibacterial agent, making it great for helping to fight off infections! This herb contains compounds called sesquiterpenes which can help relieve indigestion such as bloating or gas pains associated with lactose intolerance symptoms like nausea cramping diarrhea vomiting. Wormwood’s anti-inflammatory properties make it good for digestive health too!

Wormwood tea is a great way to start your day, especially if you are feeling bloated or congested due to a cold or flu.

You can drink wormwood tea up to three times per day, but be sure not to drink it on an empty stomach as it may cause nausea.

If you don’t want to make your own wormwood tea, consider trying our Pura Site cleansing formula which contains this powerful herb.

Pura Site is a natural cleansing that helps flush out harmful toxins and unwanted microbes from the body.

This herbal blend is formulated with Wormwood along with other natural ingredients that will help you get started on your path to better health.

So what are you waiting for? 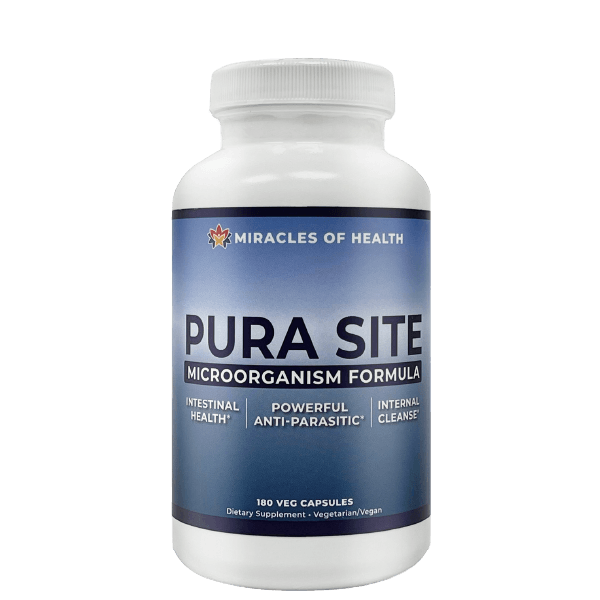 Grab a Bottle of Pura Site Today & Enjoy 15% Off Your First Order!

Just use promo code WORMWOOD at checkout to receive this offer.

Offer Excludes product bundles, gift cards, and cannot be combined with other promos or coupon codes.

Pura Site is an advanced microorganism cleansing formula that promotes a healthy balance of intestinal microbes. This anti-parasitic formula is made with herbs known to assist with detoxification of intestinal microbes and promotes healthy digestion. Formulated to effectively help combat many conditions caused by microorganism that grow, feed and steal nourishment while offering no benefit to its host.

Benefits
How it Works

Herbs are a way to strengthen the body’s systems. The unique blend of herbs in Pura Site not only strengthen the digestive system, but are also powerful in combating harmful microorganisms in the body. The herbal combinations in Pura Site work together to break a parasites life cycle and eliminate the toxins left behind.

Black Walnut: Has the ability to cleanse the blood and intestines. It is good for treating ringworm, rashes, and expelling internal parasites. It can help aid sore throat, herpes, poison ivy, and warts. It’s also known to help build enamel on teeth.

Diatomaceous Earth: Is a natural and safe way to kill parasites without chemicals. It is a non-toxic, safe substance made from crushed fossils of freshwater organisms and marine life. The microscopically sharp edges contact the insect or parasite and pierce their protective coating, so they dehydrate and die. Regarded as safe and non-toxic to animals and humans in recommended doses. Its positive effects also include balancing the intestinal flora, killing viruses, and absorbing toxins.

Fumaric Acid: Has been used traditionally to treat skin irritations such as psoriasis, but has also been shown to treat gastrointestinal diseases.

Wormwood: A powerful remedy for expelling parasites and worms. It is also an effective treatment for chronic diarrhea and leucorrhoea, and to strengthen digestive ability. It can increase stomach acidity and lowers fevers. It is also used for appetite loss and for liver, gallbladder, gastric and vascular disorder, including migraines. Wormwood has strong antimicrobial properties and is used for other infections as well.

Clove: Used to dissolve eggs found in the intestines that have been left behind by worms. It’s believed to be the only herb that actually does destroy almost all parasite eggs. When used in conjunction with black walnut and wormwood, the three can break the parasite’s lifecycle. Clove is also has antibacterial, antiviral, and antifungal properties.

Olive Leaf: Fights all types of fungi, parasites, bacteria, and viruses. It builds the immune system and is known to have antioxidant properties. It is also good for treating high blood pressure, many infectious diseases, chronic fatigue, arthritis and psoriasis.

Pau De Arco: An effective treatment of intestinal parasites and fungal diseases. It can be used to improve digestion and treat gastric and stomach ulcers. It’s an effective blood purifier against many toxic blood conditions, such as dermatitis and psoriasis. It’s also used to treat inflammatory bowel disease, tumors, rheumatism, candidvasis, warts, all types of infections, allergies, cancer, and cardiovascular problems.

Milk Thistle: Helpful in cleansing the toxins given off by parasites. Silymarin is the primary component in Milk Thistle and is known to remove liver toxins. It stimulates the production of new liver cells and protects the liver from toxins and pollutants by preventing free radical damage. It is good for inflammatory bowel disorders, psoriasis, weakened immune system and all liver disorders. It has also shown anticancer effects against prostate cancer and breast cancer. It protects the kidneys and is effective for gallbladder and adrenal disorders.